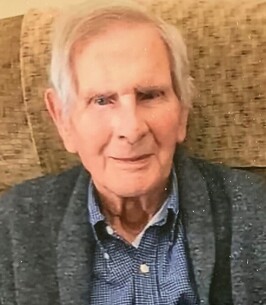 Wilfred Westman Anderson passed away peacefully in his sleep at Sunrise of Lynn Valley in North Vancouver on February 28, 2022. Born February 15, 1918, Wilf was 104 years old. He will be dearly missed by Gwendolyn his loving wife of 71 years, his daughter Sharon Greig (nee Anderson), son-in-law Michael Greig, and his grandchildren Alexander and Connor Greig. He was predeceased by his son Steve.

Wilf was a long-time resident of North Vancouver. Wilf’s parents, Icelandic farmers, originally emigrated to Churchbridge Manitoba where Wilf was born. He was one of 12 children. The family moved to North Vancouver in the 1920s where Wilf grew up and lived since. Wilf was “old Lonsdale”.

Wilf was a decorated WWII war veteran. He spent the war years fearlessly serving his country as a member of the British Columbia Dragoons. He started on motorcycles and advanced to driving tanks on the front line liberating North Africa, Italy, Holland and other areas in Europe. “Sinews of steel”. Wilf even met the Pope!

After the war, Wilf became a lumberman, running his own sawmill in North Vancouver. He met Gwen and they were married in 1951. They built their home themselves, which they still own today. He sold his sawmill in North Van and started a new mill in Devine near Anderson Lake. After a few years they returned to North Van to raise their young family. Wilf sold his mill and put his mechanical skills to work at Pioneer Grain elevator (later Richardson Terminal) on the North Vancouver waterfront where he was Head Millwright until retiring in 1985. He returned later to work Night Watching for several years.

Wilf and Gwen travelled the world extensively, always on a trip or cruise somewhere to the furthest parts of the world. Wilf also drove their motor home across Canada, the US and Mexico.

Wilf was a kind gentle man. He was skilled with his hands, could build and fix anything. Wilf was an avid Gardner and could always be found tending his veggie garden and prized cherry trees. He was well liked, always willing to help out and never one to say no to a cup of tea or desert.

A Celebration of Life will be held privately once Covid restrictions have been lifted.