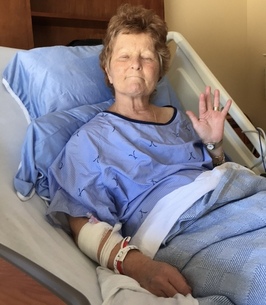 Terry Platt was a well-loved Cub leader, active NDP party member and popular BC Ferries employee as well as being a devoted wife and daughter.

Terry was introduced to Scouting by a friend back in the last century and became a Cub leader in West Vancouver when she moved there to marry her husband, Ron. She quickly became the Akela for 1st West Vancouver Cubs, a role she carried out with enthusiasm for over 25 years. It was not uncommon for Terry to be stopped in the street by former Cubs and to be excitedly introduced to their own children as Akela. She introduced many young people to the joys of the outdoors at Camp Byng and on Newcastle Island and was a fixture on Remembrance Day and Community Day as she proudly marched at the front of her pack.

Politics was an important topic in Terry’s upbringing and her Mother, Joyce Hills, encouraged her to join the NDP. In 2011 she stood as a federal candidate in Canada’s riding with the biggest name, West Vancouver, Sunshine Coast, Sea to Sky. She had little chance of winning in this strongly right-wing riding, but she toured the area tirelessly listening to the constituents, receiving ovations at all-candidate meetings and helping the marginalized and new Canadians learn how to cast their vote. She did not win, but caused a stir in 2011 when she increased the percentage of votes for the NDP by over 9% securing second place in the final tally for the first time ever in her riding.

After an initial career as a medical receptionist, Terry took her cheerful enthusiasm to “The best job I've ever had!” with BC Ferries where she worked as a crew member on the Queen of Oak Bay from June 2006 to February 2021. She tackled tasks from cleaning washrooms and assisting passengers (especially the deaf using her skills in ASL) with equal enthusiasm and was known for her ready smile and buoyant optimism.

Terry was a very good and special person a fact which could not be expressed better than in the following quote from Trevor Lautens, “She [Terry] was among the elect who, run into on the street, left you cheerfully lifted and feeling more hope for flawed and tired mankind. It said a very great deal for both of them that Terry and Ralph Sultan spoke highly of each other, far above their merely political divide.”

Terry’s generosity of spirit is best exemplified by the long running friendship with her special needs pal, Bryan. Terry was one of the few people who recognized within Bryan a simple but perceptive wit.

She and Ron would enjoy vacations on the sailboat and in more recent years in their trailer. She loved to be out of doors and active and looked forward to these breaks away from the city.

Terry never lost her cheerful, positive and determined disposition. These qualities were reflected in the way she tackled her cancer diagnosis and treatment. She accepted the hardships of the illness and kept it at bay until it claimed her. For her final words, she turned to the nurse and said, “I understand I will have a wonderful sleep.” To which, the nurse assured her, “You will have a wonderful sleep.”

The last substantial food eaten by Terry was a single apple. Terry loved apples and expressed a wish that each of her friends and companion members of Scouts Canada plant an apple tree in her honour.

She will be remembered by many with love and greatly missed by those who loved her most: her husband Ron, her sister Margaret, her mother Joyce, and Trevor McKeown - Terry's brother-in-spirit. A celebration of life will take place on May 15th at 2:00 PM at West Vancouver United Church. In lieu of flowers, please consider a donation to the Canadian Cancer Society in Terry's name.