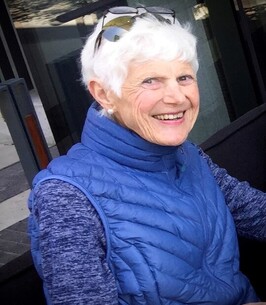 Born in Glasgow, Scotland as Sybil Janet Menzies Rodger to dental surgeon William Rodger and May Menzies. Following qualification as a radiographer at Edinburgh Royal Infirmary she set off to work her way round the world but chose to stop in Vancouver where she stayed for almost 40 years. Her long-term partner and ultimately husband John Chetwynd, a radiologist, died shortly after their marriage and she chose to revert to using her maiden name socially. Golf and bridge were her passions and around which she built many circles of close friends who supported her during her fight with cancer to which she succumbed in early July. Sybil wanted a quiet, no fuss funeral and was cremated in Squamish with ashes scattered by the lighthouse at Lighthouse Park close to her home in West Vancouver to follow her husband, John.

Her younger sister Jennifer died a few years ago in Scotland and she is survived by younger brother John who lives in the UK. Sybil has five surviving nieces in the UK with whom she had very special relationships.
Any wishes to remember Sybil in some form can be made to a charity of your choice in her name.