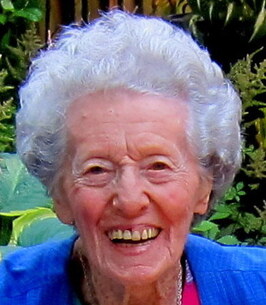 Susan Kessler, one of British Columbia’s most devoted supporters of classical music and a lifetime friend to countless musicians in England and Canada, died Wednesday, October 6th, at the age of 107. Born in Budapest, Hungary in 1914, Susan grew up in modest circumstances under the stimulation of a remarkable grandmother whose six children considered music the centre of their lives. One of them - Susan’s Aunt Irma, a piano student of Bela Bartok at Budapest’s renowned Franz Liszt Academy – was sent by Bartok to accept a piano scholarship in the 1920s in Zurich, Switzerland, an event which later proved decisive for Susan’s future.

Until World War II started, Susan worked for the Austrian Government Travel Agency in Budapest. During the war, however, her family was turned out of their apartment by Nazi sympathizers and sent to live in a house identifying them as Jewish residents. Her Aunt Irma, still in Switzerland and married now to violinist Alexander Schaichet, was able to get false citizenship papers for Susan and her mother classifying them as citizens of El Salvador. These papers enabled Susan and her mother to move out of the Jewish-labeled house, to remove identifying badges from their clothing, and to escape deportation to concentration camps. In 1947, Susan left Hungary under a Russian exit visa (supplied ‘by a boyfriend’), and joined her mother and brother in England, where they had earlier been united through her brother’s connections in the International Boy Scouts.

Susan immediately found employment as a Nanny and was quickly proficient in English. Soon back in the travel business, she resumed her active concert going in London where she met, then married, Jack Kessler, assistant concertmaster of the Philharmonia Orchestra of London. Jack was also from a Hungarian family and had studied at the Lizst Academy, but having been born in England, he served with the British army during WW II, a member of MI6.

In 1955, following a US concert tour by the Philharmonia, the Kesslers moved to Vancouver. Jack was soon actively involved in teaching and playing chamber music and became the Concertmaster of the CBC Vancouver Orchestra (1956-1967). Susan returned to the travel business, but with her vibrant personality, musical knowledge, and committed concert attendance, she came to be “one of Vancouver’s most indefatigable music connoisseurs” (David Gordon Duke, Vancouver Sun, 15 August 2018). Except for a 10-year period when Jack was head of the string department at the Victoria Conservatory, their home was in West Vancouver. Their friendships included people from many backgrounds and different countries, but all were music lovers who shared their taste for good conversation, good dining, good wine, and of course, good music.

After Jack died in 1986, Susan focused her life on her friends and music. She rarely missed a Vancouver Symphony or Opera performance and was a steadfast supporter of The Friends of Chamber Music, sometimes meeting the performers backstage to say hello to old friends. She was an active member of the Opera Guild and travelled with Guild members and other friends to Banff, Alberta, Santa Fe, New Mexico, and Eugene, Oregon, to attend music festivals. Festivals and concerts in Europe were important aspects of her visits to her Swiss family relatives. In 1985, Susan proudly attended the City of Zurich’s concert celebration marking the 90th birthday of her aunt Irma Schaichet, who still performed elegantly. Susan’s last international venture was a much-coveted trip to Mexico in her 90s with her good friends Linda Garfitt and Wayne Jackson. A picture of Susan with a Mariachi band attests to her zest for life and her indomitable spirit.

Susan maintained a loving relationship with her European family, who made many visits to British Columbia throughout her life. She was especially close to Irma and Alexander Schaichet’s family; three of the Schaichet’s grandchildren – Jurg, Marianne, and Tomi – were able to celebrate with Susan on her 100th birthday here in Vancouver, and Tomi and Jack’s cousin Yvette were here for her 105th. Susan’s grand-niece Irene visited her several times in Canada and travelled with her in Europe. She kept in especially close touch, sending photos of family events and more recently talking to Susan on Facetime, a technology that Susan thought was ‘miraculous’.

During her lifetime, Susan encouraged and supported many young musicians and emerging musical organizations. She became a stalwart supporter of Music on Main and especially enjoyed their concert/dinner events at The Cellar, a basement level jazz venue occasionally taken over by classical music lovers. She enthusiastically supported the development of The Microcosmos Quartet, whose 1st violinist, Marc Destrubé, was taught as a youth by Jack Kessler. In honour of Susan’s 100th birthday, Susan’s Swiss relatives and BC friends sponsored the first “Kessler Academy”, a workshop where young string players are mentored by members of Microcosmos and present a professional level concert of the repertoire they have learned. The Kessler Academy has become a high-quality feature of Vancouver’s summer music landscape and is now produced yearly by The Microcosmos Quartet in co-operation with Music on Main.

Vancouver’s music scene will be sadly diminished by the loss of Susan’s dedicated support and her vibrant personal commitment. Those individuals who cherish her memory can honour her life by contributing to the many musical organizations she loved and supported.