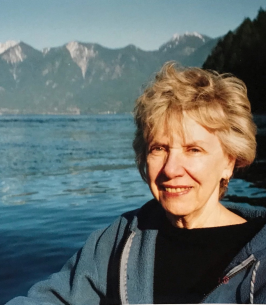 After 92 years, our beloved Sofia has left us. Her life was a journey full of quiet kindness and appreciation for the people and beauty around her. She left the world a kinder place, living and teaching the virtues of courtesy, empathy, and compassion to all who knew her.

Sofia was born in Lechnitz, Romania, emigrating to Canada at 6 weeks of age in the arms of her parents, Marie and Michael Weingartner. She grew up in Hamilton, Ontario, the eldest of four siblings. After attending Waterloo Lutheran University, Sofia fell in love with John (Jack) Walker of Hamilton and they married in 1956. They moved to Providence, Rhode Island where Jack earned his PhD in psychology at Brown University. There Sofia gave birth to her son and eldest daughter. Returning to Canada for Jack to teach at University of Western Ontario, Sofia and her husband settled in London, Ontario and gave birth to their second daughter. Soon after, Sofia tragically lost Jack to cancer in 1965. She devoted the next years of her life to raising her young children and earning her bachelor’s degree at the University of Western Ontario. Sofia had a successful teaching career at G.A Wheable Secondary School in the Business department, retiring in 1985. She came out of retirement to teach at Fanshawe College and was a proud member of the Delta Kappa Gamma society for women educators. Alongside her teaching career, Sofia showed her skills as a businesswoman, buying and selling homes. She had the joy of marrying again in 1982 to Allan Finch of London. Tragedy struck when Allan died nine years later, leaving Sofia widowed for the second time. Despite her losses and in part due to the strong support of dear friends, Sofia lived a full life and was a devoted grandmother to her three grandchildren, traveling extensively to be with them and imparting her gift of unconditional love. In 2015, Sofia moved to Vancouver to live closer to her daughter, Michele. She will be remembered and loved by all who knew her for her sweet, generous disposition, resilient strength, grace, and loving heart. She leaves behind her siblings Mary Mayer, Rosina Mitchell, Michael Weingartner (deceased), Robert Weingartner, her children, John Walker, Michele Walker (David), Marie Walker and her beloved grandchildren Jack (John), Alexander and Sofia. We would like to thank the staff, nurses, and care aides at Inglewood Care Center in West Vancouver for their care, kindness, and gentle attention to Sofia. A celebration of life will be held this summer in London, Ontario and Sofia will be interred at Hamilton Cemetery in Hamilton, Ontario. In lieu of flowers, please make a donation to a charity that supports education or the empowerment of women, two causes to which Sofia devoted her life.