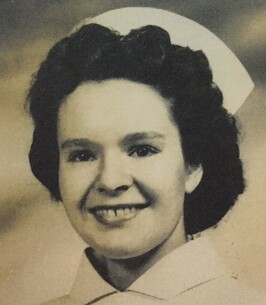 Paula was born in 1926 in Anyox, a legendary BC mining town in Northern BC. Paula lived there until the age of nine when the mine shut down. Then Paula, her younger sister Ruth, and their parents Ernie and Anna moved to East Vancouver. After a couple of years, like many of the former residents of Anyox, the family moved to the new mining town of Copper Mountain, located near Princeton. This was where Paula spent the rest of her childhood and graduated from high school.

After high school, Paula went into training at St. Paul’s Hospital and became a registered nurse. Always interested in further challenges, after a short time practicing in the hospital, Paula went to UBC and earned her nursing degree. Paula then joined the provincial Public Health Service, and was assigned to the public health unit in Duncan, where she began a career as a public health nurse. It was an exciting time, as the young nurse travelled to remote areas of Vancouver Island delivering public health services.

It was while working as a public health nurse in Duncan that Paula met and married the great love of her life, Ron. Together they lovingly raised three boys, Patrick, Peter, and Michael. As the boys grew up, Paula returned to work in an entirely new role as the secretary of Queen of Angels elementary school, a role she embraced with her usual energy and enthusiasm. Ron passed away in 1991, to Paula’s everlasting sorrow. However, she picked herself up and carried on, having a rich retirement of golf and extensive travel. In 2016, Paula moved from Duncan to North Vancouver to be closer to her family. She moved into Cedar Springs Lodge, an independent living residence in North Vancouver. Paula had been an accomplished bridge player for many years, and continued playing regularly at Cedar Springs. Fiercely independent until the end of her life, Paula went on one last Alaska Cruise before the pandemic hit, in the summer of 2019.

Survived by sons Patrick (Mary), Peter (Kelly), and Michael (Candice), and their families.