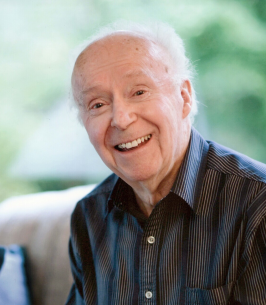 It is with a profound sense of loss that we announce the passing of Nils Karlstrom on August 24, 2022. He was surrounded by his family in North Vancouver in the last 48 hours of his life until he peacefully took his last breath.

He is survived by his wife of 66 years Audrey (née Schopp), his daughter Donna, his sons Ben (Geri) and Andrew (Gina), Grandchildren; Dana (Glenis), Matt (Kana), Colin, Emily (Gavin), and Thomas, Great Grandchildren; Lily, Nico, Solenne and Estelle. He is also survived by his half-sister Lisa and half-brother Lasse in Finland.

He was predeceased by his brothers, Bernhard, Erik and Alf as well as sisters, Helena (infant) and Carita.

Nils left his home of Jakobstad, Finland and came to Canada in 1951 on the ocean liner, The Gripsholm, in search of opportunity. Nils joined the local chapter of the Runeberg Choir shortly after traveling across Canada and settling down in Vancouver. He was a classically trained lyric tenor with the voice and harmony of an angel. He would later join the International Choir in Vancouver where he would meet his wife Audrey and marry in 1956. They would soon build their North Vancouver family home with Nils laying all of the breath-taking hardwood floors by hand, his tradecraft. This would be the family home for almost six decades and Nils’ pride and joy, which included a beautiful vegetable garden which was one of his passions. Nils gave freely of his time to others and loved to get out for coffee with friends, especially after his retirement and in his later years. This often was accompanied by a dessert of some sort as he had a known sweet tooth.

Nils was an active member in the churches that he attended throughout his life and he re-committed his life to God, along with his wife Audrey, during a Billy Graham Crusade in Vancouver in 1969. As a Christian, Nils lived a practical faith inspired by Jesus’ teaching, giving to those in need (no matter how big or how small) and supporting those around him in prayer and devotion.

Nils will be remembered as a dear friend to many and a Husband, Father, Grandfather, Great-Grandfather, Brother, and Uncle to the privileged few who were so blessed to have him in their lives.

A Celebration of Life will be held at 2pm on Thursday, September 1st at West Vancouver Baptist Church located at 450 Mathers Ave, West Vancouver, BC, V7S 1H3.

To share condolences with the family, please visit www.mckenziefuneralservices.com. Memorial donations in Nils’ name may be made to a charity of your choice.