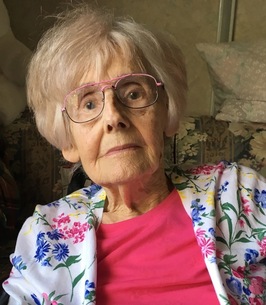 Vivacious and outgoing, Pat MacBean was born in Hampstead, London, England on March 22,
1926 to Molly and Edward Baker. When World War II began, she and her sister Betty were sent
away to the countryside to escape the bombs, but when she was sixteen, she returned to
London. Although she would like to have been a fashion designer, during the war, single
women were expected to do their part, so she trained to be a nurse. It was at a dance for
student nurses that she met her husband, Eric MacBean, becoming engaged in 1945 and
marrying in 1947. In 1949, their first child, Allyson, was born.

Postwar England was austere, with rationing and queues for food, and Eric longed to move
to Canada, where he felt life would be better. So in 1952, the family emigrated, finding
themselves in a remote Newfoundland outport. The living conditions were primitive, and the
culture shock was severe, for Pat had grown up in London, with theatres, concerts, and libraries
– and of course, electricity and running water. Yet Pat -- plucky, intelligent, and practical --
made the best of things. With her training as a nurse, she was an invaluable help to Eric, an
outport doctor, who completely depended on her. Later in life, she told funny stories about
being on board ship in heavy storms and trying to put out a chimney fire (there was no fire
department in Belleoram). In 1954, they adopted David, and after moving to St. Johns so that
Eric could begin his training as a medical officer of health, Katherine was born two years later.
When they moved to Toronto, where he attended the University of Toronto, Andrew was born.
All this moving was challenging, especially with a growing family.

In 1957, they moved to Pickering, Ontario, where Pat made many friends and enjoyed
contributing to her community as treasurer for the Hospital Women’s auxiliary and an assistant
to the librarian. A voracious reader, she enjoyed helping the librarian choose new books.
When they moved to Toronto, she took a part-time job in an arts and crafts store, where she
learned to make batiks, and then found her niche in a dress shop, which she loved. Friendly and
fun-loving, she continued to make many friends. In 1976, they finally settled in West

Vancouver, where Mum joined The League of Health and Beauty, enjoyed Scottish country
dancing, and, until her arthritis and back became problems, played badminton and tennis.
She was creative. For most of her life, she loved to sew and make crafts, sewing not only her
own and her daughters’ clothing but fashion accessories, dolls, and doll clothing. She designed
decorations and table centres, selling her creations at the West Vancouver craft fair. Being
outgoing and dynamic, she was an excellent saleswoman.

She was a natural raconteur and loved to entertain and host family dinners. She was an
excellent cook, her specialty being traditional English fare, but she also loved to dine out, and
enjoyed French and Italian cuisine. Smart and brave, she was adventurous and liked to travel,
often to England and Switzerland to see her sister and cousins, but also on cruises to Hawaii
and Mexico. One of her favourite trips was a cruise with her sister, Betty, around the
Mediterranean. She had many stories to tell about that, especially their adventures in Istanbul.
Until her hearing loss, she loved music, including opera and the three tenors – Pavarotti in
particular. She was also well-read and knowledgeable.

She was selfless and generous to a fault, going out of her way to help others, especially her
children. When her husband of 55 years became ill with cancer, she was his nurse, enabling him
to stay at home as long as possible. Although her life was often challenging, she did her best to
be positive and outgoing. Then in 2016, she was stricken with vascular dementia. With the help
of private companions, she was able to stay at home until 2018, when she moved to the
Inglewood Care Home. There she was cared for not only by the staff but by her devoted private
companions, Naty and Marlyn. With the restrictions of the pandemic and lockdowns, the last
year and a half of her life would have been lonely and difficult had it not been for Naty’s loving
care.

Pat left us on June 10, 2021. Mourning her passing are her children Allyson (Ron), David,
Katherine, and Andrew; and her nephews Bill and Peter.