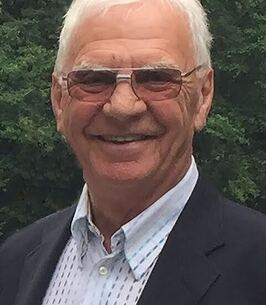 It is with great sadness that we announce the passing of Jack Weisgerber (John Sylvester Weisgerber) on June 3, 2022, surrounded by his family in North Vancouver.

He is survived by his wife of 60 years Judy, his daughter Pam Haglof and son-in-law Dale Haglof, son-in-law Julian Wooldridge as well as three grandsons Josh, Luke, and Cole, one granddaughter Jemma, and his brother Richard. He is predeceased by his daughter Joanne Wooldridge and his sisters Lorna and Patricia.

Jack was an upstanding community leader for more than 60 years. He was a member of the British Columbia Legislative Assembly for Peace River South from October 1986 until May 16, 2001. He has been an exemplary citizen, politician, businessman and family man. In the early 70s, Jack moved his family from Alberta to Dawson Creek, B.C. where he ran a small business and became an active member of the community. He then served as the Regional Economic Development Commissioner for the Peace River Regional District. He volunteered for many years as the President of the Dawson Creek Fall Fair Board, a major event in the community. His community service also includes being the President and Director of the Rotary Club of Dawson Creek. Jack continued to volunteer throughout his life. During this time Jack lived on a farm raising and training Conamara ponies and horses and taking his daughters to horse shows. He was involved with the Gyro Club for many years where he enjoyed the comradery and social gatherings of the members. He was an avid skier and fisherman and took the family on many great adventures, which we will always treasure.

Jack was first elected to the British Columbia legislature in 1986 as the Social Credit Party of British Columbia candidate for Peace River South. He served in the Social Credit government in several posts including Minister of State for Nechako and Northeast as the Minister of Energy Mines and Petroleum Resources, and as British Columbia's very first Minister of Native Affairs. This position was very important to him as he fostered relationships between the First Nations Community and the government. In the 1991 election, he was one of only seven SoCred candidates to win re-election. This re-election speaks to the great ties and respect his constituents had for him. Jack then became interim leader of the party.

After leaving politics, he was appointed to the board of BC Hydro from 2001 until 2007 and then served again in that position from July 2014 to July 2018. He was also a member of the British Columbia Treaty Commission, where he was chair of the Finance Committee. After retirement Jack and Judy became snowbirds where Jack enjoyed playing pool, shuffleboard, lawn bowling, playing poker and hiking. Jack made it a point to go for a walk every day possible.

Jack will be most remembered as an outstanding husband, father and grandfather, and will be dearly missed. A Celebration of Life will be held at a later date. To write condolences to the family, please visit www.mckenziefuneralservices.com. Memorial donations in Jacks’ name may be made to a charity of your choice.