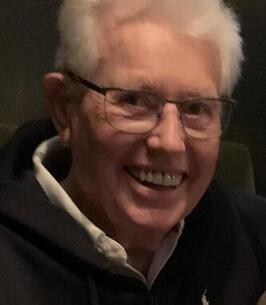 It is with profound sadness that we announce the passing of John Bennett, Friday, September 17, 2021, at his home surrounded by loved ones.
He slipped away to eternity after a two-year battle with mesothelioma. His grieving family, cherishing all the love, encouragement, and joy he brought to all, will be forever grateful.
John was born in Cardiff, Wales, December 18, 1935, to parents Walter and Daisy, following his older sister Audrey.
John struggled in his early childhood schooling due to undiagnosed dyslexia, and was told he would never attend university.
Against all odds, John’s determination to succeed had him graduate top of his class as a mechanical engineer from Cardiff University.
John loved to tell stories of the adventures and people he encountered while delivering cargo to places as far away as Argentina. A big favourite is the one about the unexplained ship trouble they encountered on three separate occasions while he was down in the engine room, always in the same location: THE BERMUDA TRIANGLE.
Prior to his mandatory 3 year conscription in the British merchant Navy, he had met his beautiful wife, Anne, on a local tennis court.. he pursued her in his black leather flying jacket and motorcycle. He proposed 18 months later on his week’s leave. Anne had caught the train up to meet her darling John in London. In the pouring rain, Anne took shelter in a phone booth to call her parents to inform them of her safe arrival, when John suddenly knocked on the door of the phone booth and asked Anne to marry him.
They were married July 19, 1958.
During John’s travels in the Navy he found Vancouver, British Columbia a place that had taken his breath away! , but that’s another story...

In 1966, John, Anne, and their three children emigrated to Canada by ship to Halifax, Nova Scotia. From there made their way to Vancouver.
During John’s lengthy career in engineering, he developed 12 plus patents, multiple companies, and a strong desire to clean up, and protect our beautiful, but endangered planet .He was working on “out of the box” plans and brilliant ideas to make Earth a better place for the people he was leaving behind, right up to his final days. On his last hospital admission, the doctor had said “I’m so sorry, there is not much more we can do for you”. John, who had difficulty speaking at this point, profoundly exclaimed “I”m sorry, but I need another 3-6 more months to complete my life’s work, please”.
John’s family, friends, and associates, used these words when describing John :
A wonderful friend, encouraging, inspirational, a light beam, inventive mind, generous spirit, a mentor, optimistic, positive attitude, humorous, brilliant, determined, a fighter, wise, brave, courageous, and stoic.

John’s final chapter was very unfair, but he had a remarkable knack for finding a positive side in any situation, no matter how dark and hopeless. His optimism helped many men in their darkest times and their comradeship gave him strength to carry on and make it home to his devoted darling Anne and family.
John never burdened his friends or family with his suffering. He was a brave courageous gentleman, right till the end.
John will be forever remembered by his devoted wife Anne , his children, grandchildren and friends.
John’s last wish was for his wisdom to be passed on through the enjoyment of reading his life’s journal and hoped the readers would be inspired to live a life as full as he had endured.
John ended his journal with the words:
God give me the courage to accept my destiny.
The wisdom to know your will. The strength to complete your work.
Amen