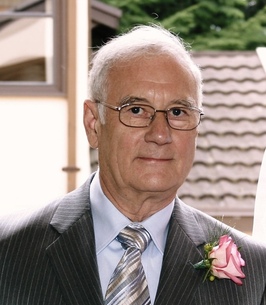 My dad was born in 1937 in the Black Forest in Germany. World war II started when he was just two years old and his life ended during a global pandemic. In between these two devastating world events, was the life of a peaceful, gentle and kind man. Both my sister, Estelle, and I received numerous messages each in the past few weeks that repeated the words gentle and peaceful when describing our dad.

Hermann was a jeweller, a gardener and a mushroom forager. He had a soft spot for animals and he was a lover of good food and good beer. And when I say a lover of good food – I mean, he basically remembered vacations by the good meals he had on them. He could describe a menu in detail and with enthusiasm years after a trip.

A meal was always made better though, if any part of it was foraged from the forest or his garden. Chanterelles picked in wet woods, a fish caught on a camping trip, or a fresh radish straight out of the garden. Add some wine or cider that he’d brewed with friends, and he was in heaven – no matter how bad that wine tasted to my mother.

I feel like one of my great successes as his child was sneaking a Guiness beer into the hospital for him. It was definitely worth the small risk for the joy and pleasure it brought him and I believe it may have been his last taste of any food or drink.
My dad’s full name was Hermann Ferdinand Blasy. He was always Ferdi to his family in Germany and this nickname is always said with great affection.

Ferdi started his career as a jeweller at the age of 14. He did an apprenticeship as a goldsmith for seven years. He boarded a ship – the Seven Seas – from Germany in 1961, at the age of 24 and sailed to Canada. He settled into Toronto and continued his career making handmade jewellery. Based on our photo albums, he spent his Ontario weekends in a red canoe, catching fish and sleeping in canvas tents, occasionally with a visit from a bear.

A few years later he moved from to Vancouver and in June of 1970 he met my mother, Sylvie, on Mt. Seymour. They were married in December of that same year. He continued with jewellery into his 70s – making hand-made gold chains that were known among Vancouver jewellers for their precision and attention to detail. My father was lucky enough to be able to focus on his art, while my mother took care of the bills, deliveries, and my sister and I.

I remember my dad’s laughter well, punctuating a funny situation with a heartwarming giggle. I have a very recent memory of my dad – unstable on his feet – teetering down our hallway towards his garden with a sharp knife. I was on the phone with my sister and felt like a parent chasing a toddler, reminding him to be careful. Even my sister could hear his giggles over the phone.


My Dad was a family man. He loved being with his kids and grandkids. He loved visits with his sister and two brothers from Germany, and all of their children and grandchildren. But perhaps most of all, he loved my mother – his wife of 51 years.

As he lay in a hospital bed in the last few weeks of his life, it wasn’t always apparent that he was fully aware. But his face would light up whenever my mom came for a visit, and he teared up when I showed him old photographs of him and my mom falling in love on a camping trip to Brandywine falls in 1970.

As my dad’s mobility decreased, his world became smaller. Camping trips were replaced with local walks, which eased into puttering in his garden. James – my husband – and I built a raised garden bed in his front yard last summer and he filled it with plants. On my last visit with him at home, my dad was planning the expansion of this front-yard garden. “This is medicine,” he said to me, referring to his garden bed packed with lettuce and radish, artichokes, parsley and carrots. Tomatoes, peppers and herbs. I would secretly thin a few things out at every visit. My dad’s heart still desired his full-sized garden.

Until the very end my dad loved being outside and had a deep appreciation for the beauty in nature. So, I will leave you all with one task to honour Hermann Ferdi Opa Blasy. Something I’d like you to do today or tomorrow morning: go outside and take the time to notice one beautiful thing. Rain on a flower blossom, a bird’s song, a child’s laughter or the greenness of a new fern.
~
Hermann Ferdinand Blasy. March 30, 1937 - June 3,2022. Born in Freiburg, Germany.
Hermann passed away peacefully at the North Shore Hospice. He is survived by his wife Sylvie, children Estelle (Todd), Vérèna (James), grandchildren Angélique, Liliana, Cassia and Isla, as well as his siblings Peter, Ute and Joseph.