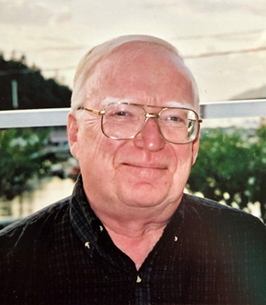 It is with great sadness that we announce the sudden passing of Desmond Phillip Smith (Des) on Tuesday, August 31, 2021 at the age of 86. Des was born in Winnipeg the son of Robert (Bert) Cobley Smith of London, England and Marguerite Rose Frances Smith (nee Marshall) of Bournemouth, England. Des was an amazing husband to his loving wife and soul mate Dorothy. Des will also be forever remembered as a wonderful father and mentor to his daughter Suzanne and son Gregory (Nicolle). Des was Granddad to Brendan. He will be also lovingly remembered by his nieces Judy-Lynn Dahlgren, Suzanne Serl (Don) and Linda Smith, nephews Randy Smith (Roya) and Brian Smith (Rodney). Great nieces and nephews, Ashley, Graham, Kendra, Morgan, Jennifer and Emily.

Des grew up in Winnipeg and Calgary attending Lord Selkirk Elementary in Winnipeg before moving to Calgary and returning to Winnipeg to graduate with advanced standing. Des first worked with the CN Railway, then moved out West to Vancouver to survey local airport (YVR) runways in the 1950's and '60's as part of the post-war WWII effort with the Department of Transport. In 1964 Des met Dorothy, his love of 60 years, married for 56. He took a temporary role in the Land Department position at the District of North Vancouver which turned into a 35 year commitment in both the Lands and Planning Departments. As a professional planner, Des made numerous contributions to long-range Planning at the District, working with the community on Community Plans, an Official Community Plan and other efforts that included an Award-winning Alpine Plan. His efforts to engage the community and help shape the growth of North Vancouver from Deep Cove to the Capilano River continue to influence its development. Des was supportive of others starting out in their career. He also loved to engage with his fellow coworkers over a coffee (gathering them up at breaktime) or over a beer outside of work, his historical knowledge and sense of humour always at the ready.

In retirement, Des loved to research and write. He became an accomplished writer and collaboratist, co-writing a book on the history of communities in the eastern half of North Vancouver, titled “Echoes Across Seymour”. He continued to conduct research toward a future book, “A History of the Vancouver Airport”.

Des was a kind, thoughtful and considerate man. He was always willing to help and expressed his gratitude to anyone who helped him. Passionate about photography, dogs, nature, and local communities. Des volunteered as archivist for the North Vancouver Youth Band, documenting many of its performances, here and abroad, even
modernizing the Band’s crest.

Des enjoyed exploring the remote communities of BC, however always claimed that North Vancouver was his favourite place in the world. Des, his wife Dorothy and their children spent many holidays exploring the wonders of BC together.

Words can not express how much we will miss this wonderful man. We will keep him close in our hearts.

We thank all the community staff, including paramedics, doctors, nurses and VCH home care staff who helped care for Des.

In lieu of flowers, his family asks that a donation be made to charity of your choice.

A Celebration of Life will be held at a later date.