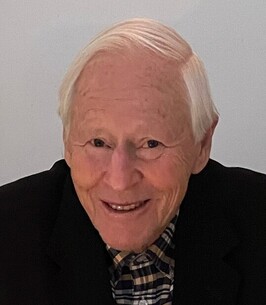 Alan was born March 17th, 1930 in Vancouver to Alec and Winifred Finnie, immigrants from Liverpool, England. His birth on St. Patrick’s Day is considered lucky, and this luck extended throughout his entire life. In Alan’s early childhood, he was fortunate to live at Englesea Lodge in the West End with Stanley Park as his back yard. Soon after, the family moved to 29th & Marine in West Vancouver, a time when ferries shuttled passengers to Vancouver. Alan always spoke fondly of summers at the family cottage in Horseshoe Bay and taking the Union Steamship to visit his uncle in Powell River. He played tennis in the summers and skied at Hollyburn Lodge in the winters. Alan graduated from West Van High School in 1947, and after a brief stint as a mail room clerk with the Home Oil Company, his neighbor thought he would be a good fit in the insurance business, immediately bringing him on board.

Alan met his bride-to-be in 1956 in Vancouver and married Joan in Midway, BC on February 9th, 1957. They were happily married for 64 years. Family was of great importance to him and together they raised four children. He always enjoyed the many family gatherings, events, and festivities, as did the family. Alan particularly savoured family time during the long summer days at Myrtle Point, and being together in front of a crackling fireplace after a day of skiing in Whistler.
Alan loved life and had an endless positive outlook right up to his passing. He nurtured his family and provided all his children with love and meaningful advice. His passion was being on the mountains skiing, be it the North Shore, the Okanagan, or Whistler – with summer hiking too. As an adult, Alan was also an avid sportsman involved in field hockey, boating, fishing, curling, and racquetball. Around home in his spare time, he could be found immersed in his forest garden. He loved his trees, his powersaw, and a blazing bonfire. He was an expert Bridge player and taught the game of Crib to all. He had a curiosity for flags, coins, and stamps. And he was renowned for his Sunday morning pancakes!

Not surprisingly, Alan was an adventurer and loved to travel. In his early years, exploration of British Columbia provided boundless opportunities for road trips. That evolved into travel farther abroad, where Alan and Joan enjoyed many winter trips to sunnier climates. With the advent of ocean and river cruise ships, together they were able to travel the globe to countless interesting and exotic destinations.

Alan ran a successful insurance business and had a robust career until his full retirement in 2005. He understood the industry, cared for his clients and delivered outstanding advice and value. His career advanced quickly and he was appointed the President of Pemberton Insurance in 1962. He served as a director of the Greater Vancouver Insurance Agents Association, and after that, was elected President of the Insurance Brokers Association of BC in 1972. In 1978, he become an underwriting member at Lloyd’s of London. Alan was personable and made many great business friendships. He had amazing business acumen, was reliably able to assess situations & opportunities, and could make calculated decisions with sound foresight.

Alan was special and a great believer and supporter of many organizations. He was a volunteer leader of Cub Scouts with his sons, he volunteered as a fundraiser for the St. John’s hospice building project at UBC, he supported the capital campaign for the rebuilding of Collingwood Senior High School, and he participated in many volunteer roles with St. Stephen’s Church in West Vancouver, and the Order of St. John. He proudly received The Order of the Diocese of New Westminster for his work in 2016.

Alan was exceptional and will be remembered as a true gentleman. He had a touch of class, was gentle, caring, generous, practical, interesting, and genuine.

A family burial service will be held June 29th, 2021. A memorial church service to honour and celebrate Alan’s life will be announced at a later date. Donations in his memory may be made to the Order of St. John Palliative Care Foundation, 6389 Stadium Road, Vancouver V6T 1Z4.